Thomas Piketty: ‘I have no problem with inequality per se. Up to a point it can be a motivation for growth.’ Photograph: Graeme Robertson

With all due respect to the «dismal science», this doesn’t happen often: hundreds of people are queueing round the block for an economics lecture on a lovely summer’s evening in London. And those are the people who have successfully booked seats. There’s another queue of shifty-looking people hoping for return tickets and steeling themselves for disappointment. This, one might well think, is a microcosm of the dysfunctionally inegalitarian society under late capitalism that the speaker indicts in his book: a society cruelly divided between the haves and the have-nots.

And there are other divisions: black and white, young and old, City suits and flip-flop-sporting slackers, women and men, venerable baldies and twentysomething asymmetric fringes, post-endogenous growth theorists and their bitter foes, pre-post-endogenous growth theorists (sometimes known as endogenous growth theorists). But the most emblematic social division for our purposes is that between those in the queues who moan loudly about being gouged by the merchandising («£30 for a book? They’ve got to be kidding. Who can afford that?») and those who’ve come clutching one, sometimes two copies of Capital in the Twenty-First Century, in the dewy-eyed hope that its author, Professor Thomas Piketty, will deign to sign it. Piketty later apologises for not putting the book online, saying it was because his publisher wouldn’t like it: if he was really serious about reducing inequality, though, you’d think he’d ignore his publisher’s compunctions.

Outside the Peacock Theatre, round the corner from the London School for Economics, the mood resembles an oversubscribed first night: it’s ostensibly genteel and polite, but hides simmering resentments that could switch rapidly from sarcastic exchanges to elbow-shovings to full-on riot followed by zombie apocalypse if we don’t all get in.

Don’t these people know that they’re queueing to hear about the historic shifts in the capital-income ratio, modifications to the Kuznets curve and the elasticity of substitution of labour? The counterintuitive answer is that quite a lot of them do. For those who have lived through austerity years that have made the rich richer and the poor more desperate, for those who read Richard Wilkinson and Kate Pickett’s The Spirit Level: Why More Equal Societies Almost Always Do Better and wondered how we could become more Nordically egalitarian, Piketty has a message they want to hear: economics should be used for good rather than evil, to effectively redistribute wealth. Pikettians don’t chant, but if they did it would go: «What do we want? An egalitarian shift in the ratio between g and r, where r is growth and g the return on capital. When do we want it? As soon as feasible, thanks.»

Once we get inside the 999-seat theatre for the latest date on Piketty’s sell-out world tour, our host, LSE Professor Tim Besley, says that tonight’s guest has been described as a rock star. He doesn’t mention that Piketty, earlier today, spent time doing what touring rock stars do (receiving the blessing of Saint Russell of Brand during a personal audience), but instead explains that the 43-year-old Frenchman once studied economic inequality at the LSE with Tony Atkinson, now honorary fellow of economics at Oxford. «He wasn’t the only rock star to study at the LSE,» says Besley. He’s alluding, of course, to Mick Jagger who studied economics for a year at the LSE half a century ago and reportedly found it – imagine! – boring.

The lecture proves to be a greatest hits of his book, accompanied by visuals with charmingly low-spec graphs to clinch his central point. If we don’t reform capitalism in the manner he suggests, Piketty argues, we risk going back to 19th-century wealth distribution.

Piketty’s disquieting suggestion is that we are returning to pre-industrial levels of growth and wealth disparities at Regency levels. «That’s why,» a female Swiss journalist sitting next to me whispers, «feminism was wrong. Women should marry into capital rather than work.» I’m not sure if that’s what Piketty meant, but it’s an interesting – if reactionary – corollary of his argument.

Piketty wants us to realise that the 20th century was unusual: rapid, unrepeatable population increases that helped accelerate growth, combined with shocks (two world wars, the Great Depression) that reduced the value of capital and so kept inequalities low. These are exceptions in human history rather than the rules. The 21st century won’t be like the 20th, the professor predicts. If we don’t act, the accumulation of capital in the hands of the very few will resemble the norms in the early 19th or 18th centuries.

Someone asks Piketty if what Margaret Thatcher proposed in the 1980s was right, namely that if you reduce inequality you reduce growth. «I have no problem with inequality per se,» he replies. «Up to a point it can be a motivation for growth. When inequalities grow more extreme, it can be no good for growth. It leads to the perpetuation of inequality. Over time that stops mobility from happening.»

The Frenchman is a genial lecturer, if one who uses comedy to lead us from cheerful uplands into the thickets of economic theory. Apparently, he says, it’s not a joke that Amazon plans to replace workers with drones – and uses this story to make an elegant point about the elasticity of substitution of labour. I quite liked his barb about Downton Abbey: by 1913, land represented only 5% of capital so really wasn’t as important as the drama suggests. Take that, Julian Fellowes.

As we stream out into the night, we are confronted by a new equation. If m is victims of Piketty mania and u the number of people who understand what he’s on about, then while before the lecture, m>u, after it, the ratio is m<u. That, if not a solution to the problem of inequality, is an achievement.

We asked attendees of Piketty’s London talks where they stood on the economist’s theories. 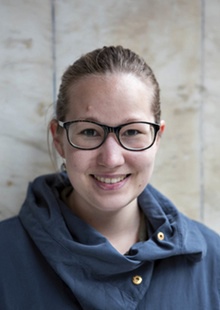 Nina Malli, 24, LSE postgraduate student, originally from Austria
I’ve just finished my thesis about inequality in developing countries, so I had to be here. In a sense, I don’t really care if there are inequalities as long as they can be justified in improving the lives of the poor. What Piketty seems to be saying is that inequalities no longer help and that seems clear to me: in developing countries there is hereditary wealth, handed from the rich to the rich, so there is political stability for a few people who have the resources. That’s not good enough. My professor says that Piketty’s analysis of the data is careful enough, which is different from what the FT critique of his book said. He’s not the only one engaged with the issue of inequality: I particularly like the work of Thomas Pogge [the German philosopher and director of the Global Justice Programme]. I don’t think it’s a coincidence so many intellectuals are thinking about this issue right now – something’s gone wrong. I’ve bought the book and am going to read it. 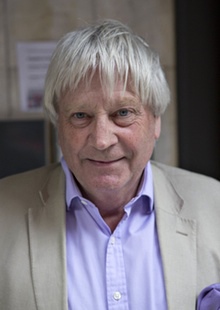 Ray Sheath, 73, campaigner, London
I think Piketty’s analysis is too simplistic. Taxing the wealthy is a starting point, but if we’re serious about correcting the problems of capitalism, we have to go deeper. In the 1990s, I was involved in the Democracy Project to encourage people to take control over their lives – very hard to do that when capitalism is globalised and our political systems are dysfunctional. Piketty doesn’t address these issues, but he should. I’m also involved in the issue of trusteeship – this is something Piketty should be thinking about. Only through getting rid of the power of shareholders and dealing with the issue of ownership by establishing trusteeships in industry can we overcome the excesses of capitalism, and improve the well-being of society and social responsibility. 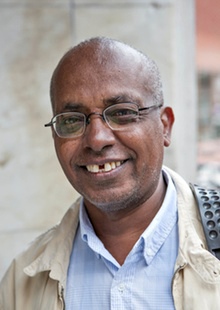 Musellem Adem, 60, secondary school maths teacher, London, originally from Eritrea
I haven’t read the book yet, but I have read the FT review, which criticised his use of data, so I want to find out more about that. I’m interested in the issue of inequality particularly in rich countries like Britain. I came to Britain from Africa in 1979 and I didn’t expect that people here would be so divided between rich and poor, that inequality would be an issue in a rich country, but it is, and increasingly so. I see income and wealth differences all the time even in the classes I teach. I still find «public schools», where Cameron and others in government went, confusing. Why are they called public when they are private and for the children of the rich? 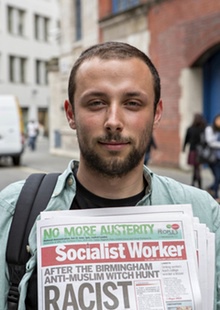 Tom Kay, 21, Socialist Worker employee, Sheffield
I welcome anybody who says that capitalism is corrupt, and it clearly is whether you look at what’s happening in Iraq or the bedroom tax in Britain. Piketty says he’s never read Marx, which is a shame. A Marxist analysis of economics is clearly what we need now. Really, I’m here to encourage people to attend Marxism 2014, a festival of ideas and resistance in ondon, in July. I like what he says about inequality being wrong, but I don’t think his solutions go far enough. I agree with taxing the wealthy, but there is more to destroying capitalism than that. 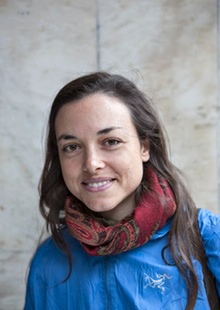 Laia Gordei, 30, journalism postgraduate student, originally from Barcelona
I’m not sure I’m convinced by his point of view because I think I’m more of a Marxist. He’s more of a guru of the social democratic parties. I haven’t read his book yet and I’m not sure I will. It’s super-expensive: £30 for 700 pages. How can they charge so much for a book about inequality?